by Kait Van Riper | Oct 14, 2021 | All Stories, Do Something, Empowered Together, Raising World Changers, So Much Good 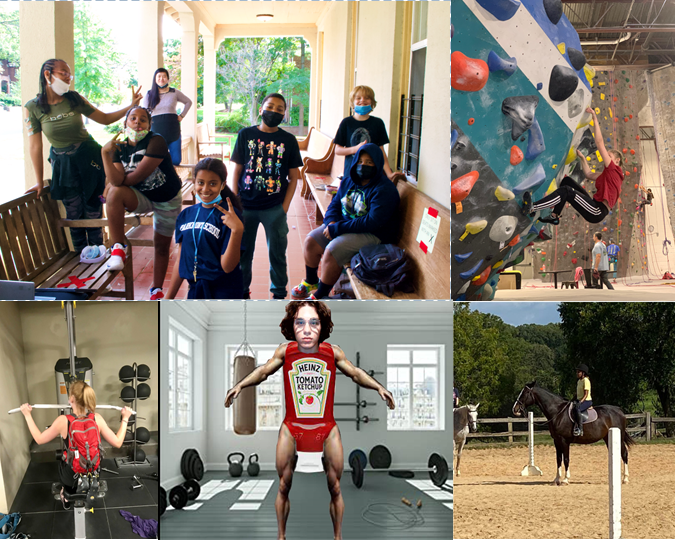 Between September 15-30, Carry the Future celebrated the second annual Race for Refugees. Students, professionals, Carry the Future staff, moms, dads, and kids from all over the world ran, walked, jogged, swam, and hiked to raise money for those forced to flee their homes. Parkmont School in Washington, DC, was one of the participating schools in this virtual event.

Parkmont has a special relationship with Carry the Future. Several years ago, Willa Reinhard, the school administrator, asked her class to read Alan Gratz’s book, Refugee. The stories of children their age who, forced by war and violence, had to flee their homes deeply touched the students. Moved to action, the students wanted to do something.

Reinhard was ready to move on to the next unit of their curriculum, drama. However, the students had other things in mind. They wanted to learn more about refugees, and more importantly, they felt they could do something tangible to help refugees.

Thus, Willa and the students collectively decided to postpone the drama unit, and students took charge of planning a fundraising event for refugees. They planned, marketed, made tickets, researched, and hosted an event that screened The White Helmets documentary. Carry the Future Board of Directors Vice-President Sara Gilliam, who had briefly worked at Parkmont years earlier, returned to the school to talk about refugees. Proceeds from the event went to Carry the Future.

Parkmont has kept a connection with Carry the Future and continues to educate students about refugees. Willa Reinhard joined in the fun of the first virtual race in 2020. She and her family participated. “We got outdoors, and it really lifted our spirits during the pandemic,” she said.

During a time of lockdowns, quarantine, and online schooling, getting out in the fresh air and doing something for a worthy cause made a difference in her life—as well as the lives of refugees.

The year 2021 saw life return to some degree of normalcy, like in-person school. However, many field trips, community events, and sports were still limited or canceled due to COVID-19.

Reinhard decided Parkmont needed to participate in the Race for Refugees. She suggested her idea to the school, and they created seven teams made up of students and staff. The students created fun team names like Team Ketchup and Team Agree to Disagree.

The teams followed the Carry the Future Facebook challenges to earn points and compete. They posted pictures of themselves running, hiking, and walking. Because this year’s race included various forms of exercise, the students got creative: lifting weights, rock-climbing, and doing other sports. “They were really inspired to get moving,” says Reinhard. The winning team was a middle school group that earned 56 points and a class pizza party.

Students benefited from exercising and getting outdoors, all while knowing they were contributing to refugee lives. Before the race, they watched a video about Carry the Future and refugees. Parkmont School has about seventy students, and nearly every child participated. Aside from registration, Parkmont donated $1500 to Carry the Future.

Reinhard explained to students that nearly all the proceeds go directly to refugees. Carry the Future has no paid employees, so while the students wished they could give more, they were happy to understand that every dollar truly does make a real impact on refugees’ lives.

Whether hosting fundraisers or running races, it’s the real-world connections that impact these students. Reinhard says that students told her, “This is fun, and we’re doing this to help other people.” She continues, “You love to hear that when you’re a teacher. It makes it all worthwhile.”

Carry the Future’s Sara Gilliam agrees. She recalls hearing about all the good that Parkmont School was doing for refugees during an especially dark time of discouraging global news. “It was such a boost for everyone. It’s beautiful and inspiring for all of us. We’re excited about the next generation of activists.”

Gilliam says, “Parkmont is and always has been a magical place.”

We at Carry the Future are so grateful for places like Parkmont School. We have great hope for our future world changers.