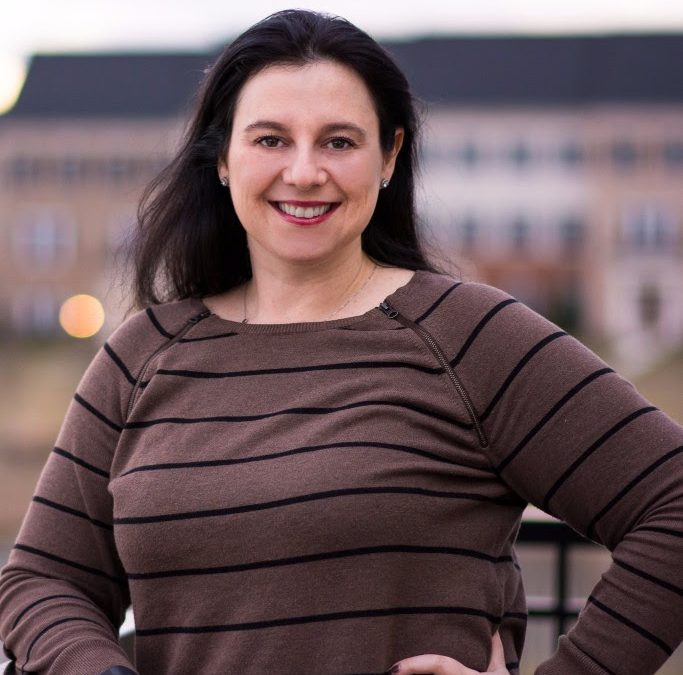 A simple donation from a stranger made a world of difference to one refugee girl.

Meet Bronislava Shmilovich, board member, treasurer and volunteer at Carry the Future since 2016.

Bronislava was that refugee girl.

She was born in the country of Moldova in Eastern Europe. The country of Moldova (formerly Moldavia) is located between Ukraine and Romania. In 1990, a region known as Transnistria, formerly part of Ukraine, erupted in conflict over the language and laws. Pockets of insurgence erupted in Transnistria. The Russian speaking citizens wanted independence. Separatists declared their independence and renamed the country Pridnestrovian Moldavian Soviet Socialist Republic (PMR).

In 1991, the country of Moldova declared its independence from the USSR.

While the country raged in political conflict, Antisemitism grew. Since Bronislava’s family is Jewish, they soon became targets of violence and discrimination. They were classified “Jewish” instead of a nationality.

Her family was no stranger to religious persecution; Bronislava’s grandparents were Holocaust survivors from Ukraine who started a new life in Moldova. As the danger and violence in Moldova continued, her family was faced with several options: stay in the danger zone, apply for refugee asylum status in the US, or go to Israel. At the time, Israel offered refuge to any Jewish people in peril. Israel promised immediate evacuation unlike the lengthy status application process for the United States. A humanitarian plane would be sent for them, no waiting required. Yet the drawbacks to living in Israel, with its own wars and humanitarian issues, far outweighed the immediate escape. While some members of her family opted to go, Bronislava’s parents and sibling decided to risk the wait for the United States.

They applied for refugee asylum status for the United States. They waited for three years. During that time, Bronislava could not attend school and spent most days in hiding. Soldiers who once fought alongside her father, now sought to kill him and the family because they were Jewish. Bullets whizzing through the streets were commonplace. Sometimes she slept in a bathtub. She lived in a literal warzone. The Mafia would seek out Jewish families. Since it was a small community, everyone knew who was Jewish. Once the Mafia heard a Jewish family was fleeing the country, they would come at night, cut up the family and leave a note saying, “You won’t take our money with you.” The horrors were getting closer, still they waited for word from America. When they escaped, they lived in a Ukranian refugee camp.

Eventually, in 1993, after all the waiting, fear and trauma, their turn came to enter the United States. Personal belongings were not permitted and no more than $1000 was allowed into the American borders. Leaving it all behind, they embarked on a journey to freedom. They were told they would be sent to Baltimore, Maryland. Knowing little about the United States, they were relieved they were going to a city.

At age 10, Bronislava stepped off the plane in New York City. Their sponsor from the Jewish society met them at the airport and handed the family an envelope that stated they were to be located in Jacksonville, Florida not Baltimore.  The hot, balmy South was quite a culture shock to the family.

Life as an American was not an easy transition for a ten-year-old deemed “different” than her classmates. Her mother, once an English teacher in Moldova, now cleaned houses for a living. Always the educator, Bronislava’s mom made this a lesson for her daughter: “We did not come to this country for you to clean houses. You’re going to make something of yourself.”

Bronislava remembers feeling resentful of her differences. “You have to deal a lot with your own acceptance. Coming in as a teenager, you already feel like a fish out of water. You dress different, talk different. I grew to resent that. I was always on display and didn’t want to talk about it anymore.”

She recounts the stigma of refugees, even within the immigrant population. The refugee label comes with assumptions and judgments. She continues: “For the longest time, I just thought it’s who I am and it does define me, but I don’t have to be loud about it. I could just choose to assimilate and not let it define me. I didn’t want to talk about it.”

When she was 15, tired of being the outsider, she moved to San Francisco to live with relatives. “When you’re a refugee, you don’t really have a home, but if anywhere has a special place in my heart, it’s San Francisco.” Bronislava lived there until she attended college in Washington, DC.

In 2015, images of Alan Kurdi’s tiny lifeless body were all over the media, alerting the world to the Syrian crisis. Carry the Future was in its early stages, handing out baby carriers to refugee parents. Bronislava was a new mom herself, and when she discovered Carry the Future, she wanted to help. She laughs explaining how the organization wasn’t necessarily a good match for her. She hated her baby carrier; she didn’t define herself as a ‘crunchy mom’ who wore her baby.  However, even if not a perfect fit, Carry the Future was a notable organization, with nearly 99% of donations going directly to refugees, so she joined as a volunteer.

She did a baby carrier drive to collect 100 carriers and ended up with over 600 carriers in the DC storage unit. The drive turned into an annual event known as the “DC Carrier Distribution Packing Event.”

Bronislava wanted to do more, so she used her education and talents to help with marketing and internet presence for Carry the Future. She began to see the need to speak out about her own experience as a refugee. She explained that it took a long time to process and come to terms with PTSD about her own experience. Then, a new mom and part of a new organization, she felt it was time to start telling her story.

“I saw so many people wanting to help and do the right thing. I felt the need to tell a first-hand account of what a refugee is. Many people want to do things and save people without the understanding of what a refugee is going through, or what it feels like to be on the other side. People on the other side are not the poor, unfortunate ones. They were lawyers. They were doctors. Respect that refugees are not here by choice. They are not that different. It can happen to anybody.”

And then, Bronislava tells a story that she frequently shares with volunteers: The story of the lime green pants. Her family spent time in a Ukranian refugee camp while they waited for US entry. They left all their belongings behind. All she had was the worn clothes on her back and whatever old rags people donated. One day, going through the bin of donations, she came across new, high-wasted, lime green pants. They were clean, fashionable (“It was the 90s,” she quips) and now they belonged to her.

“I couldn’t believe someone would give these away. It was a symbol to me. It meant everything to me. It was more than a donation. It was a human connection to someone in a time of need.” One small moment, a small act by a stranger, gave hope to a young girl in a refugee camp.

She tells volunteers to donate things that are clean and in good condition. Something you would actually wear or use. “You may not really need something and it could mean the world to someone else. If we can assist to alleviate some hardship for those seeking refuge and safety, it means everything.”

Bronislava went on a trip to Greece to work in the refugee camps. When she looked into the eyes of the nine and ten-year-old refugee children, she knew their pain. They’re vulnerable. “Everything they have ahead depends on what happens to them at this camp, at this point on. They can either end up in a dark place or succeeding. [Being a refugee] does not have to define you, but it shapes who you are.”

Today, Bronislava has a husband, son and dual Masters degrees. She has a successful career and still makes time to be a board member and treasurer for Carry the Future. “It is my duty to give back and I’m in a position to do so,” she explains.