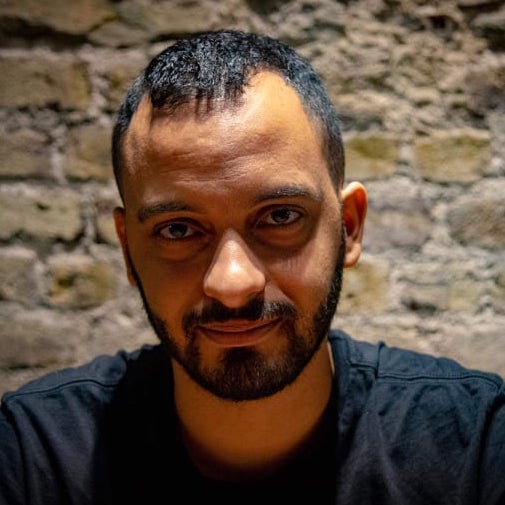 “It’s hard to hate up close,” he says sincerely.

Meet Aws Jubair, member of the Carry the Future Advisory Council. Aws has every right to hate, but instead chooses peace and bridge-building.

Aws grew up in Baghdad and had a self proclaimed “happy childhood.” He describes his young life as similar to what many middle class, Western children experience, one of birthday parties and presents, school and playdates with neighborhood friends. Life was good.

All that changed in 2003 when American troops entered. Life drastically took a turn. Once a peaceful neighborhood, now transformed into a warzone. Aws saw dead bodies in the street and neighbors getting shot. As the void of a functioning government widened, extremists rose up to fill the gap.

Aws comes from a mixed background: his father is Iraqi Shia, mother is Palestinian Sunni. From 2005 to 2007, Sunni extremists killed the Shia and vice versa. Ongoing conflict and violence continued to escalate.

Then came the moment that his family needed to make a choice: to stay or to go? They were one of the last two Shia families left in the neighborhood. One night, a terrorist/ extremist group abducted their neighbor and put him in the trunk of a car. The man’s body was found the next morning; he was dead.

Aws and his family fled to a new neighborhood, but more difficulties followed. His mother was a Palestinian Sunni, she didn’t wear a head scarf, and she had light skin, so she was considered an outsider.

Members of a militia reported that she kidnapped children. As a result, she was arrested and held for fifty days, then finally released as there was no evidence to support the accusation. She missed New Year’s Eve while she was in jail. It was the first year that she didn’t dress up like Santa for her children; a metaphor for the end of childlike innocence.

As if death and extremists weren’t enough to manage, Aws was bullied in school for discussing his beliefs as an Atheist. A group of four men (most likely militia loyalists) cornered and harassed him. They threatened to return, so Aws stopped attending school.

Finally, he and his family found a new life in Turkey, but life didn’t get easier. “In some ways, being a refugee is more difficult than living in a war,” he says. Aws explains that he still had friends, school, and work in his home country. They lived an upper middle class life. Once they arrived in Turkey, they had to leave all that behind. Refugee status prohibited them from working and even traveling between cities. A refugee has to get permission from the police to leave the city. Racism and prejudice is alive in Turkey.

His family moved to Turkey hoping it would be a stepping stone to the United States. Aws says he still believed in “the American Dream,” despite the fact that the US Military demolished his city. He watched American movies and tv shows like David Letterman and John Stewart. He knew there were opportunities to go to university, work and live a safe life. There was more to America.  “I knew that America wasn’t just about war. There were good people there.”

Even during his time in Baghdad, he was making connections, not building walls. “I didn’t hate the American soldiers. I would talk to them about politics and movies. I’d shake hands with them. I was curious and wanted to get to know them before I made any judgment.”

His family applied to the US, and waited three long years in hopes of one day living in Seattle. Sadly, after years of waiting, they were rejected.

Aws was devastated to hear the news, but soon found a new life through volunteer work with NGOs. He became the manager of a shelter that worked with LGBTQ refugees in 2017. The shelter offered food, housing, and classes.

“I found a purpose for my life through supporting people in this position.” Aws explains the LGBTQ refugees are one of the most vulnerable populations. He finds himself in a role to protect and support through his work and activism. “I thought I was a victim, until I started working at the shelter. Then I saw how lucky and privileged I was as a straight man.”

He continues to work passionately for others. During COVID-19, he created The United Hands for Refugees. He’s also the co-founder of the De-Otherize Dialogue Project. He’s an advocate, co-founder, director, and oversees over fifty volunteers. He is currently working on a movie project that he hopes will break down hatred and stereotypes.

“If you come closer to a person and talk, you will find you have a lot in common, even when you come from different places.”

A true visionary, Aws continues to hope and dream for the future, while living out his ideals and philosophies. He says the biggest act the average person can do to help refugees is to be understanding and accepting.

“We (refugees) are normal people: engineers, students, teachers, doctors, all types of people. The only thing that separates us is the circumstances we were born into.”

Aws takes a breath and continues with passion: “We could be your neighbors and your friends. We’re just human.”

Aws leaves an impression on those he speaks to. He proves it really is hard to hate up close. Conversations might just be the key to healing. The United States has much to learn from Aws.