by Susannah Monteith | Aug 5, 2019 | All Stories, Do Something, Empowered Together, So Much Good 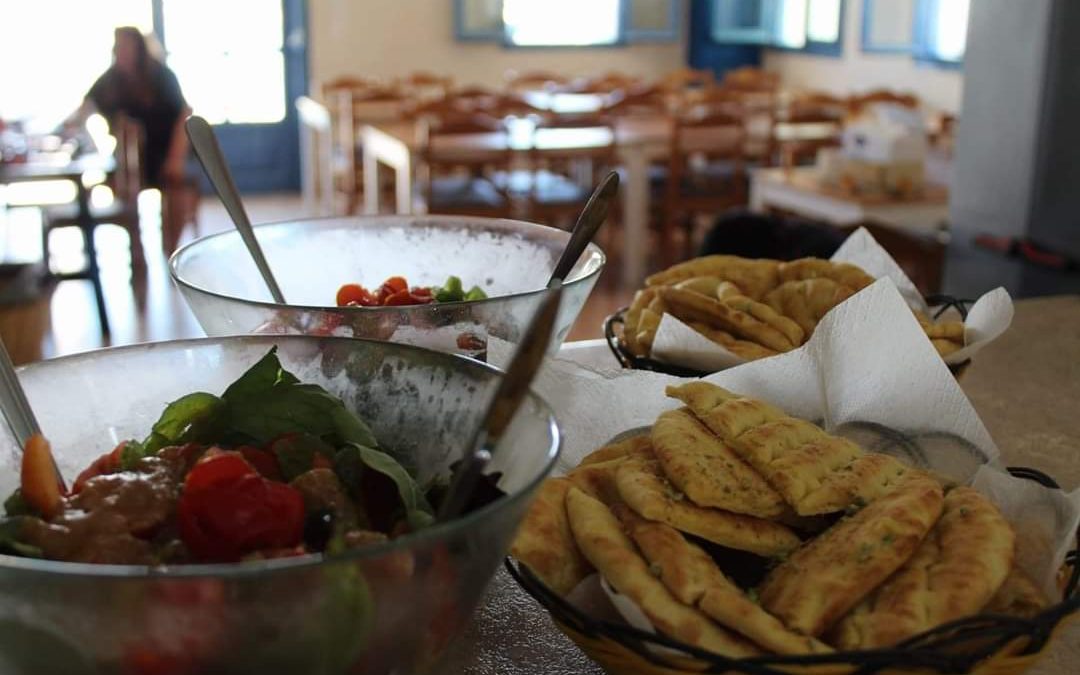 Carry the Future’s mission is to provide comfort and dignity to refugees around the world. We cannot accomplish this mission alone. Home for All, a restaurant in Greece, is proving that when we help each other we are truly empowered together.

450 miles from Athens, Greece, in the northeastern Aegean Sea, lays the island of Lesvos, Greece’s third largest island. Named for the son of the Greek hero Lapithos, Lesvos is both a destination for vacationers and an entry point for thousands of refugees arriving by sea, sometimes hundreds a day. The refugees are sent to Moria refugee camp, Europe’s largest refugee camp to be processed. Designed for around 3000 people, the camp is so-called home to 9,000 people.

At the height of the European migrant crisis in 2015, Moria was a way station as tens of thousands of asylum seekers poured into the region on their way to Northern Europe. Once the borders closed, it left thousands at camps like Moria who now must wait, oftentimes over a year, for their asylum cases to be settled. Overcrowding and violence lead refugees to spill out of the camp into the nearby olive groves. Life in Moria is synonymous with suffering. Overcrowding, disease, fighting, suicide, squalor and individuals plagued by effects of post-traumatic stress disorder are realities. Individuals wait for hours in lines for food.

Less than 9 km from Moria, a charming restaurant accentuated by stone and overlooking the sea, that once functioned as a destination for locals and tourists to dine sits. This is Home for All. Owned by a couple named Katerina and Nikos, Home for All is what they renamed their restaurant as their outreach expanded because they found that refugees began to say it felt like “home.” Carry the Future Teams have had the pleasure of socializing with volunteers and refugees at Home for All as well as volunteering in their ever expanding kitchen. A haven for refugees, the tone at Home for All is one of acceptance and warmth, community and connectivity. Most evenings end with music, dancing, and singing. The resilient human spirit floats to the surface.

Early in the crisis, Katerina and Nikos began helping refugees before any camp or NGO on the island. In 2014, they helped by giving free food from the restaurant to refugees, sleeping on the beach to wait for boats that arrived in order to offer clothes, blankets, shoes, and comfort. They developed relationships with Moria Camp leaders and received permission to transport children and families from the camp to Home for All for a hot meal. Over time, they converted their business into an NGO, thereby allowing them to distribute food at no cost.

Currently, Home for All provides lunch and dinner to four groups at Moria per day. Three days per week, they offer meals to the unaccompanied minors. Four days per week, Home for All offers cooking classes for minors. Every day, they prepare lunch and dinner for the sick and those who have special dietary requirements. Twice a week, food is prepared for the Greek homeless. They even offer massage and yoga sessions to volunteers and refugees. cwith  opportunities for swimming, playing music, dancing, and socializing. At its heart, Katerina says Home for All is a “philosophy,” a way of living without borders.

Want to help refugees around the world? Carry the Future believes that everyone can do something! Click here to get involved.