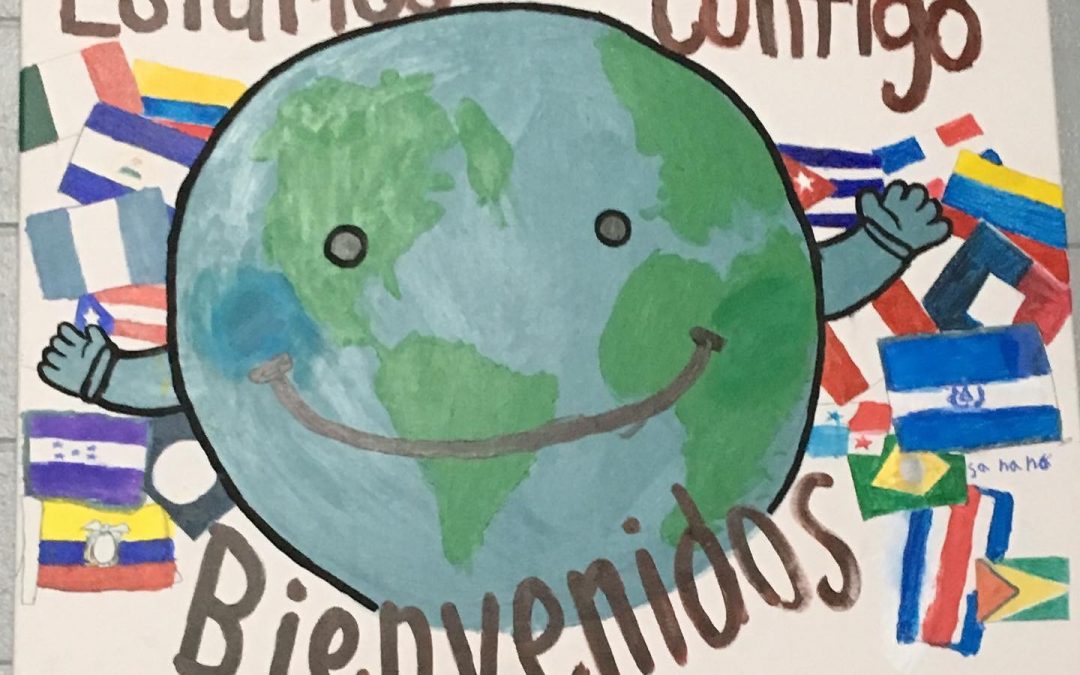 At Carry the Future, we are constantly reminded that small gestures can make big impacts. We are thankful for every person who has contributed in some way to our organization. Whether it is through donations of goods, time, or energy, they all make a difference. One of our volunteers recently completed a trip to Texas. What she saw there confirmed that what you are doing to help refugees and asylum seekers really matters.

“I’ve been volunteering with Carry the Future for years after spending much of my childhood serving in and around refugee camps. Bundles of Joy was my first community outreach, and as so many of my fellow volunteers can testify, people show up to do good. I was overwhelmed by the amount of people who donated baby clothes, worked together to package them, and shared funds to buy diapers. It seemed practical, a concrete miniature babyshower to give new mamas.

“Later, I transitioned to crocheting and teaching others how to make baby blankets to send alongside Carry the Future volunteers. It was a joy to imagine little ones wrapped in cozy ‘snuggles,’ as my son calls his blankie. However, to be honest, I considered blanket making first and foremost an exercise in community building. A gathering of people to learn and connect with refugees not as a media-blurred mass but at our most human level: as families. My goal was to begin conversations at a welcoming neutral level, ‘Aren’t these blankets so cute!’ and to therefore connect groups and communities to a willingness to be a voice for refugees because they see them for who they are, people who want what’s best for their family. The blankets, I thought, were an adorable symbolic gesture. A way of saying ‘We hope this eases the road’ but symbolic more than anything.

“I was wrong. The blankets are a big deal.

“My dad and I loaded up in Houston early in the morning. I had boxes of blankets and teddy bears from our amazing World Refugee Celebration in which people around the city gathered to knit, crochet, and hand-tie fleece blankets as a reflection of our commitment to seeing the precious humanity in each refugee. We were headed to the Humanitarian Respite Center, in McAllen, Texas.

“Six hours later, we arrived in a large building directly across from the bus terminal. There were security officers signing volunteers in before a large room filled with people. There were chairs in rows and gym mats laid along the walls for people to rest on but what was so remarkable was the quiet: easily over a hundred people in this space yet it felt like everyone was whispering. No one wanted to garner attention. People looked exhausted at every level. As we walked through the building, we saw amazing organization. An initial sign-in center to connect people with their next stop via bus or plane tickets. A hygiene counter where families received everything from soap to diapers before they got in line for the showers. Lines taped out in the floor for people to wait for supplies like new clothes, shoelaces, and undergarments. The third room was a cafeteria with tables full of people eating with absolute focus. We made our way upstairs, past the doctor’s office where an amazing practitioner worked pro bono from noon to seven every day and into the storage room which looked an awful lot like boxes on boxes of love.

“Again the organization was incredible. There were hundreds of shipping boxes, bags full of donated goods, and stacks of diaper boxes. Everything was laid out and marked with sizes and seasons while volunteers were hard at work sorting. We joined folks from Austin, a Boy Scout troop from Dripping Springs, and local people who were all ready to serve. The love was palpable throughout the whole building.

“I began to work on organizing children’s underwear. As a mom of a pre-k kiddo, I know that underwear is a constant battle and that the right size is essential. Boxes on boxes of your donations were opened and sorted from toddler size to extra large. It was wonderful to realize that, because of these donations, little ones were being given a fresh start! After completing the boys and girls section, I broached the topic of passing out blankets with Jorge, the wonderful leader at the Respite Center. The man never stopped moving, but he was delighted by the idea and clearly touched by the handmade gifts Houston had sent.

“With a small bag of blankets, I got started. Right by the stairway, I met a family with a little one waiting patiently as his mom worked to get the right size for each of them. When I offered him a blanket, his whole face lit up. He carefully selected a green and white camo blanket and immediately became a superhero, wrapping it around his neck and making swoosh noises! His older brother, around ten, was looking on intently and when I opened the bag towards him, he was surprised. He thoughtfully picked out his own blanket and cradled it in his arms before politely touching my arm and pointing. Tucked behind his mom’s legs was a third brother, too shy to peek out. The oldest brother wanted to be sure that he got one too. My bag emptied quickly and I rushed back upstairs to gather more as little faces leaned out around tired parents to spy what was happening.

“There was raw delight on the faces of these kiddos. When they realized that they could not only have a soft blanket but that they got to CHOOSE, it was a game changer. Each kid took long minutes running their hands over the blankets, looking at the pattern, and looking back at me for confirmation that this was really truly for them. Little boys gathered in swarms, calling to each other and exclaiming over the superheroes or trucks. Their parents would nudge them into a mumbled ‘gracias’ and smile at me as one parent to another with the struggle of helping little humans learn manners.  One little girl shyly came up to me and asked to swap when she saw that in my next batch I had a princess blanket. For the rest of the day when I spotted her, I would comment, “Oh it’s la princessa!” and her little face would just light up as she would nod and wave. As they picked their blanket, I would lean and whisper, ‘My sister, my friend, my student, made this specific blanket for YOU. They wanted to say ‘welcome.’

“Blankets make parenting so much easier. There was a dad whose little one was sprawled on a gym mat as he wrapped himself around her. He saw me sharing blankets and carefully picked a beautiful pink fluffy one for her. After watching him tenderly tuck her in from fingers to toes, I saw him relax for a moment. She had a soft space to rest at last. One mother selected a gorgeous oversized crochet blanket for her little baby. Later that day, I passed her waiting in line: she had wrapped her baby gently in it and folded the corner over her shoulder as she nursed. The dignity on her face was a gift. She had a way to care for her child and maintain her own privacy at the same time. It was huge. The mothers delighted in poring over the patterns and picking the perfect design. They watched out for each other, waving their friends over to join in the selection process, trading blankets and chatting about sizes and softness.

“It wasn’t just the little ones who needed the blankets. An older girl, perhaps sixteen or seventeen, shyly slipped up to my side and ran her hand over the blankets I had over my arm. At that point, my Spanish was battling my exhaustion so I couldn’t quite catch what she said but offered her the blanket immediately, assuming she had a little one with her that needed one. My dad was with me and pointed her out on our next trip. She was stunningly beautiful and there was a terrible moment as I realized how dangerous her beauty would have been on her long trip. She was sitting in the corner clutching that blanket—not in the way that you sit when you are cold but with a desperate need to feel its softness and comfort. There was grief there that I couldn’t help—but that blanket made a start.

“The blankets are soft. They are warm and beautiful. They are symbolic expressions of love. They are so much more. I realized as we passed them out that with each blanket I doubled a kid’s entire possessions. Moms had a way to comfort their little ones. Dads could ensure a marked out safe place for their babies. One lady crept up to me and waited patiently as swarms of kids picked out their blankets. I offered her the bag and asked whether it was for a little boy or little girl. She said she didn’t know yet—she was five months pregnant, traveling alone. She put my hand on her bump as I shared that I too was a mom and that I wished her all the best luck. We picked out a beautifully stitched baby quilt for her to hold and to hope on: that after all this travel, her baby will have a safe place to rest.”

Your contributions matter. Please continue to help Carry the Future provide for refugees around the world!  Click here to set up a monthly donation!